Several IGB users asked us to add the latest fruit fly genome and annotations to IGB. Here I describe how I did this, using data files downloaded from FlyBase, the chief annotation authority for fruit fly genomes.

To make the data available to IGB users, I needed to download the sequence data and reference gene model annotations, convert them to formats IGB can use for visualization, and then deploy the converted files on the IGBQuickLoad.org Web site. This is the Web site that IGB uses to retrieve data for annotated, sequenced genomes. When IGB users select a genome, the reference gene model track data that automatically loads into IGB comes from the IGBQuickLoad site or one of its mirror sites.

Adding a new genome directory to the IGBQuickLoad data repository

To start, I added a new genome version directory (folder) to the IGBQuickLoad.org data repository. I did this using “svn”, the program we use to manage the data sets. I used the “svn mkdir” command to create a new directory named D_melanogaster_Jul_2014, following our naming convention for genome versions. In IGB, we use the genus, species, release month and year to specify a genome version. (Sometimes we also include an extra name to indicate variety or something else, such as  Z_mays_B73.) However, in this case, we don’t need a variety suffix, so we only use the genus and species to indicate the genome.

The IGBQuickLoad.org data repository is version-controlled as part of a large subversion (svn) repository – the master copy is hosted at https://svn.transvar.org/repos/genomes/trunk/pub/quickload/ and is publicly accessible. Which means: anyone who wants a copy can use “svn co” to get it.

The IGB team has been using subversion for many years to track important data files, like gene annotations or sequence, that people use for data analysis and visualization in IGB. To save effort, we also use the same repository to serve data files to IGB, using the IGB QuickLoad mechanism. When we need to deploy a new quickload site – on our local computers or via a Web server – we just use “svn co” to check out a fresh copy and then copy over some bigger data files (e.g., BAM files) that are too large to add to the repo. However, genome sequence files for smaller genomes (like fruit fly) are not very large and so I usually version-control these in the repository along with the gene model files. (More on this later.)

Adding genome sequence to the repository

Next, I looked around the FlyBase.org Web site to find a file containing the new genome assembly sequences. I found it here: ftp://ftp.flybase.net/genomes/Drosophila_melanogaster/dmel_r6.03_FB2014_06/fasta/. The directory contained a file named dmel-all-chromosome-r6.03.fasta.gz. Based on the name, I guessed this file contained the genome sequence, so I downloaded that.

Next, I used Jim Kent’s faToTwoBit program to convert the file from fasta to 2bit format, a compressed, indexed format that enables IGB (and other programs) to retrieve data from the file without having to read the entire thing – called “random access.” This is what enables IGB to load just part of a genomic sequence, which is faster and more memory-efficient than loading the entire thing.

After converting the fasta file to 2bit, I next used Kent’s twoBitInfo program to make a genome.txt file, which is a tab-delimited file that lists the sequences and their sizes. When a user selects a genome version in IGB, IGB then sends a request to a QuickLoad site that supports that genome, asking for a copy of that genomes genome.txt file, which is stored in the genome directory for that genome version. IGB reads this file and uses the information to populate the Current Sequence tab on the right side of the main IGB  window. The Current Sequence tab displays a sortable, clickable table that you can use to change chromosomes in the main display.

This is different from (and we think better than) other genome browser designs, where users have to operate a menu or click on a to-scale genome graphic to change which sequence is on display. Menus don’t work well if there are more than a few items in the menu, and a to-scale genome graphic is even worse because smaller contigs are too hard to select. That’s why in IGB, we use a sortable table instead. And, of course, users can also search for contigs and genes by name.

A quick review of the genome.txt file revealed that this new assembly contains the expected fruit fly chromosome arm sequences (e.g., 2L), but it also contains a lot of other sequences with identifiers like “211000022280328” and “2Cen_mapped_Scaffold_10_D1684.” Altogether, the genome sequence file contains 1,870 sequences.

Interesting! I was not expecting to find so many sequences in this release because the previous release (dm3) contained the autosomal chromosome arms and the sex chromosomes only. But including these additional sequences makes sense. I imagine that the assembly creators at BDGP did not want to omit some-one’s favorite gene from the release just because it didn’t assemble into the main chromosome arms.

Getting gene model annotations from FlyBase

I reviewed the files in each folder, starting with the GFF files. I’ve never had good experiences with GFF, mainly because different people use it in difference ways, despite many attempts to standardize the format. At first glance, the FlyBase GFF looked too complex to handle easily.

So next, I turned to the files in the GTF directory. I don’t know why FlyBase included these files in their ftp site, but I’m guessing it had something to do with supporting users who want to use CuffLinks to analyze RNA-Seq data. CuffLinks uses GTF to represent gene models, andI already have code that converts CuffLinks GTF to BED-detail, our preferred format for distributing gene model data files in IGB. A quick review of the file showed me that the format was indeed simpler, and so I decided to work with that file instead of the GFF files.

Nonetheless, it looked simpler, and so I wrote a new script to handle FlyBase GTF as distinct from other forms of GTF. The script is named flybaseGtfToBed.py and resides in bitbucket repo https://bitbucket.org/lorainelab/genomes_src. I used this new code to create a BED-detail file named D_melanogaster_Jul_2014.bed, which contains gene models converted from the GTF file.

About BED-detail and how we use it in IGB

BED-detail, also known as BED14, has all the same fields as BED12, plus two more. In IGB, we use these extra fields to provide useful meta-data about a gene model. In IGB, field 13 contains the gene name for a gene model. And field 14 contains human-friendly text describing the gene’s function. When users open these files in IGB, IGB formats them internally in a way that allows users to do keyword searches on field 14. This is very useful, but of course it depends on having human-friendly text available to use in this field. For Arabidopsis, we use the “curator summary” text in field 14. I’m not sure what we can use for fruit fly as I have not been able to find an equivalent to the Arabidopsis “curator summary.”

We use BED-detail mainly because it’s compact and easy to index using tabix. (More on this later.) Also, the structure of the BED-detail files makes them extremely useful in high-throughput data analysis using R/Bioconductor tools. My favorite RNA-Seq data analysis trick to find the smallest start and largest end position for all transcripts belonging to the same gene, and I identify those by grouping on gene symbol. Then I use the coordinates to count reads overlapping the gene. Once I have those counts, I can feed them to edgeR or DESeq or other similar tools.

For simplicity, I named the file after the genome release: D_melanogaster_Jul_2014.bed. Next, I sorted the file by sequence name and start position, compressed it using bgzip, indexed it using tabix, and added the files to our subversion repository:

Viewing the data in IGB 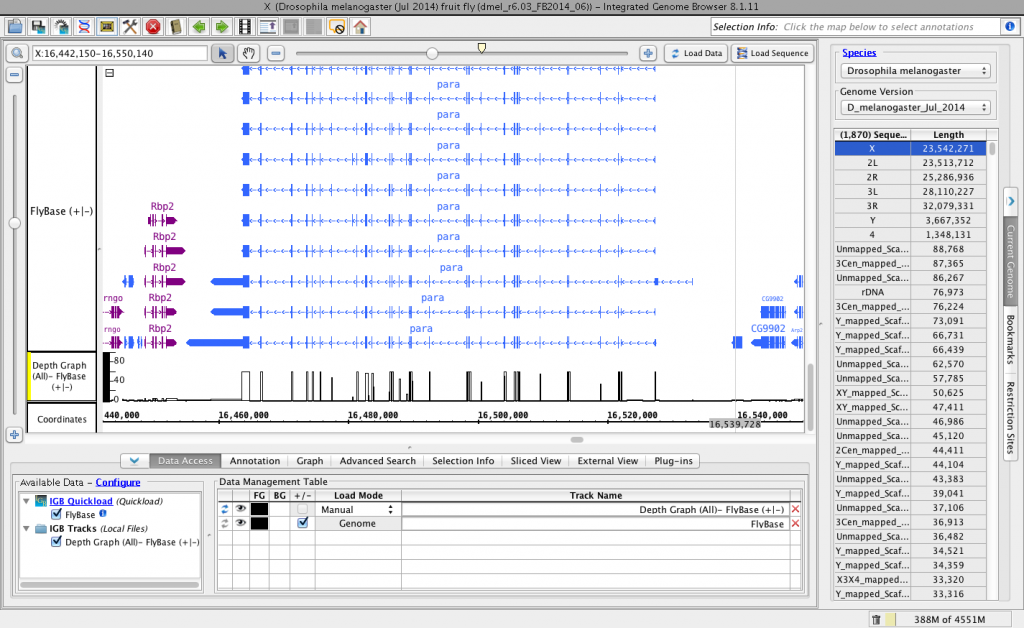 Today I’m moving source code (mainly python) from the genomes subversion repository over to a new repository on BitBucket.

The genomes subversion repository contains version-control data files for many different genomes that we’ve collected from many sources, such as the UCSC Genome  downloads page, the UCSC Table Browser, Phytozome (for plants), and model organism databases like DictyBase. We launched the genomes repository back in 2008 as part of an Arabidospis 2010 project grant that support IGB from 2008 to 2012. Our original idea was to use version control systems (cvs or svn) to track big data files from Arabidopsis and other species. The repository would not only serve as a useful data archive, it would also provide a way to feed data into IGB.

However, the genomes repo also contains source code we wrote for converting data files, setting up QuickLoad sites, and other tasks. The source code was stored in a directory named “src” (for “source”). You can browse it here: https://svn.transvar.org/repos/genomes/trunk/pub/src/.

Today, I’m moving all that source code over to a new repo hosted on BitBucket: https://bitbucket.org/lorainelab/genomes_src.

I’m doing this because the BitBucket UI for browsing code, reviewing changes, and managing the project is about a thousand times better than what we are currently using on our subversion server. Since BitBucket offers free source code hosting for reasonably sized repositories, there’s no point in hosting any of our source code ourselves, and during the last year, I’ve been happily migrating all our lab code onto BitBucket. Also, I’d like to start using git for version control, at least for all our source code. Setting up a git repository on our server would probably not be difficult, but then we would have yet another service to maintain.  Rather than try to host everything we do on our own machines (which consume electricity and sysadmin time) I’ve realized we should off-load as much as we can onto public, free resources like BitBucket. And at least for now, BitBucket seems like the best option because it’s run by Atlassian, which seems like it has staying power, a mature management structure, and excellent support.

More about the genomes repository:

The genomes repo contains a lot of data, not just code. In fact, most of is data – more than 11 Gb worth of sequence files, annotation files, and some meta-data files describing what’s there.

I’d love to migrate the data onto BitBucket and start using git and not svn for managing the data. I’d love to make it possible for people to fork the repo, improve the annotations, and then issue pull requests back to the main site. The problem is: I don’t know if BitBucket can handle a repository as big as ours – it’s 11 Gb. Also, most of our files are in binary formats (2bit, .tbi, .gz, etc) and I’m not sure how git will handle those files when I or other people make a change. Will it store multiple copies of an enormous file if I modify a small part of it? How would diffs work? It would be terrific if git could somehow handle our binary formats in a smart way.

So for now, I’ll continue to use our subversion server to host and version control the data sets, but I’ll use bitbucket for source code, which is probably what the team at Atlassian would prefer.

One last comment: For now, I’m leaving the “src” directory untouched in the original genomes repo, but I’ll add a notice letting users know that this part of the repository is moving to bitbucket.